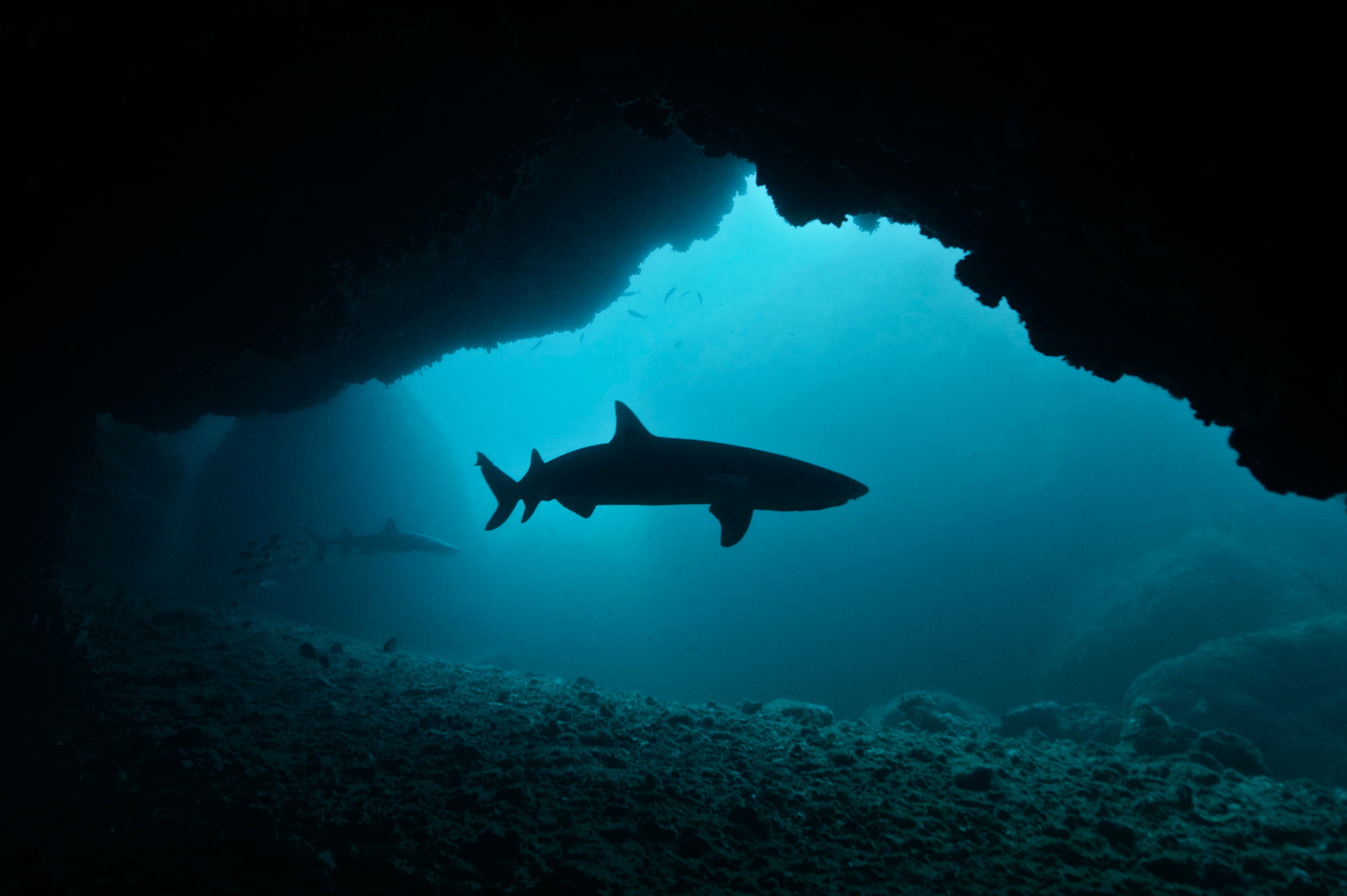 The Philippines – one of the few places in the world where pelagic thresher shark (Alopias pelagicus) sightings are a common occurrence, happening daily. These rare sharks ritualistically travel to seamounts in order to be cleaned of parasites, all just within reach of scuba divers.  Malapascua, a spit of land less than two miles long boasts the closest proximity to these sunken-island reefs. Due to this unique ecotourism opportunity, the island has exploded in popularity for science and sport. Renowned researchers from all over the globe make their pilgrimage to the Philippines to study this incredible encounter. For its part, Malapascua has responded. It is also home to SharkLink, a locally run ecological safety measure masterminded by DiveLink Cebu. Partnering with dive shops, fisherman, scientists, government bodies and the community, Project SharkLink strives to address and monitor the delicate intricacies and economics of tourism, eco- concerns and the native livelihood – fishing. DiveLink Cebu, also host to the Thresher Shark Research and Conservation Project, collaborates with Save Philippines Seas as well as many other like-minded organizations. These watchdog organizations engage the help of research volunteers and locals alike. Researchers compile data to determine trends in reef health and thresher shark behavior. Patterns are recorded along with local fish catch reported by the native fishermen. Government and community officials evaluate the findings to manage the delicate balance of sport, science, sustainability and economics. Dive Link and its brother organizations are pivotal in analyzing the data and integrating all stakeholders to find feasible solutions, often involving community members and eliciting support from resident businesses.
To get a glimpse of how Project SharkLink was conceived, the article “For the Love of Sharks” by Dennis Bait-tit tells the story of DiveLink Cebu owner Gary Cases, a staunch and vocal advocate for conservation and community involvement for years on Malapascua. Recognizing early on the interplay between the island’s competing concerns, Dennis’s quest for solutions led him to DiveLink where he met Gary and quickly realized they shared the same goals. Over time they constructed a communication medium for those who did not have a voice.  Initiating dialogue with all the necessary parties, Project SharkLink was born:

“a collaborative project that aims to define characteristics of cleaning stations for sharks and rays… as well as, develop a feasibility study of proposed social support programs for the local community on Malapascua Island.”

Thresher sharks are opportunistic hunters and can be easily caught if feeding during the day. (Oliver & Turner et al. 2013) This phenomenon allows poachers easy access to the sharks, and can cause severe decline to populations. The fins are often sold for massive profits in the illegal shark finning trade. Other Illegal fishing practices include: cyanide poisoning, net use and dynamite fishing. Explosions have decimated reefs and cleaning stations throughout the thresher habitat. Malapascua’s ecotourism boom has also increased demand on the local fisheries resulting on the implementation of new laws, thus mounting pressures on the local fishermen and economy. Project SharkLink strives to educate the community to alleviate these transitional dilemmas. They have made significant inroads by implementing, Migo sa Iho, or Friend of Sharks. Migo sa Iho is a group of fishermen who protect the waters they once fished. Due to their hard work and recent successes, the Bureau of Fisheries and Aquatic Resources have deputized the group allowing them to enforce the new laws. Impressed by their progress, Greenpeace Southeast Asia assisted in organizing the first Shark Summit in the Philippines thereby enabling more stakeholders to become involved in the discussions of shark conservation than ever before in the Philippines. Information compiled from SharkLink, Thresher Shark Research Project, Save Philippines Seas and others, was used to help implement the first shark and ray sanctuary in the Philippines. The Shark Summit helped finalize these important new laws. It also increased fishing restrictions on all shark and ray trade throughout the country, not just Malapasqua. The viable and sustainable results on Malapasqua underscore the need for and importance of scientific collaboration and citizen science.
I met Gary and Dennis when I started working with the Thresher Shark Research and Conservation Project. I was immediately fascinated with how science and politics collided on such a small, remote island far from governmental influence and oversight. As a research diver, I wanted to help collect vital data from this rare ecosystem. Thresher sharks come to shallow-water cleaning stations and exhibit “circular-stance-swimming.” (Simon & Husey et al. 2011) This figure-eight pattern allows prolonged time for cleaner fish to interact with the sharks. Additionally, a deeper understanding of thresher shark behavior and the symbiosis they share with cleaning fish can be ascertained. The cleaning stations found on seamounts or sunken reefs are home to vast coral life. Species of fish that feed off of the parasites on larger fish live here and clean the sharks. (Grutter 1999) Research is leading experts to believe that seamounts are an important ecological habitat for large pelagic species, such as sharks and rays. (Simon et al. 2006 & 2011) Pelagic thresher sharks have low fecundity and mature rates. They are also listed as vulnerable by the International Union for the Conservation of Nature and Natural Resources. Reef monitoring techniques were used to understand how these reefs are being altered over time near Malapascua. I was a part of a team of divers that constructed quadrats. These quadrats were used to measure and take pictures of vital cleaning station habitat. The reef area was split into sections and important information was compiled over a series of dives. Thousands of pictures were analyzed so that percent cover of reef organisms could be recorded.  Therefore, changes to the structure of the cleaning stations sharks preferred could be documented over time. These images were then stitched together to illustrate a detailed aerial view of the study site.
Projects like SharkLink and the Thresher Shark Research Project have produced important data that cannot be ignored and which has led to significant changes instigating new law enforcement. Monitoring initiatives in the area show a heavy decline in reef cover since recent disasters. On top of detrimental fishing practices such as dynamite fishing, the Philippines has been victim to the strongest storm in recent history decimating reefs including those near Malapascua.  Recovery is slow. With each setback, government officials are realizing the importance of the need for stringent laws and improved enforcement to facilitate the healing process after such devastating events coupled with illegal fishing practices. In light of the storm Yolanda, the first shark and ray sanctuary in the Philippines was born. However, how long funding will last and whether or not succeeding government bodies will continue to agree, is unclear. Dennis believes monitoring programs involving citizen science are imperative due to the continuous data they produce at low cost. Money can then be spent in areas where funding may become lacking. At the same time, citizen science efforts spread awareness to local communities and dive operations  allowing them to participate in the process. Initiatives like the Migo sa Iho must also continue to integrate members of the community to help protect marine resources and expand awareness. Community outreach and participation is key to continued agreement to sustainable marine conservation. And, the good news continues, Dennis has recently been informed that thresher sharks will be included in CITES Appendix II!